Agnieszka is a keen mountain biker and her Surly town bike is a regular sight parked up in the bike racks at the front door of our headquarters in Livingston. She first took up mountain biking after she moved to Edinburgh in the mid-2000s, heading out to the Pentlands to ride some of the classic loops in the hills that form the city’s southern border. From the Pentland’s mellow trails, the natural pathway is on to the Border’s mountain bike centres given that Glentress and Inners (= Innerleithen) are only a short trip away.

From there, Agnieszka turned to downhill racing in 2010, tackling a selection of gnarly Scottish races at Inners and Glencoe before pregnancy called a halt to her developing DH career. After a few years, she headed back between the tapes with some enduro racing, including a great 6th place finish at Tweedlove’s King & Queen of the Hill in 2014, but her riding has always mainly been about enjoyment rather than training and racing. 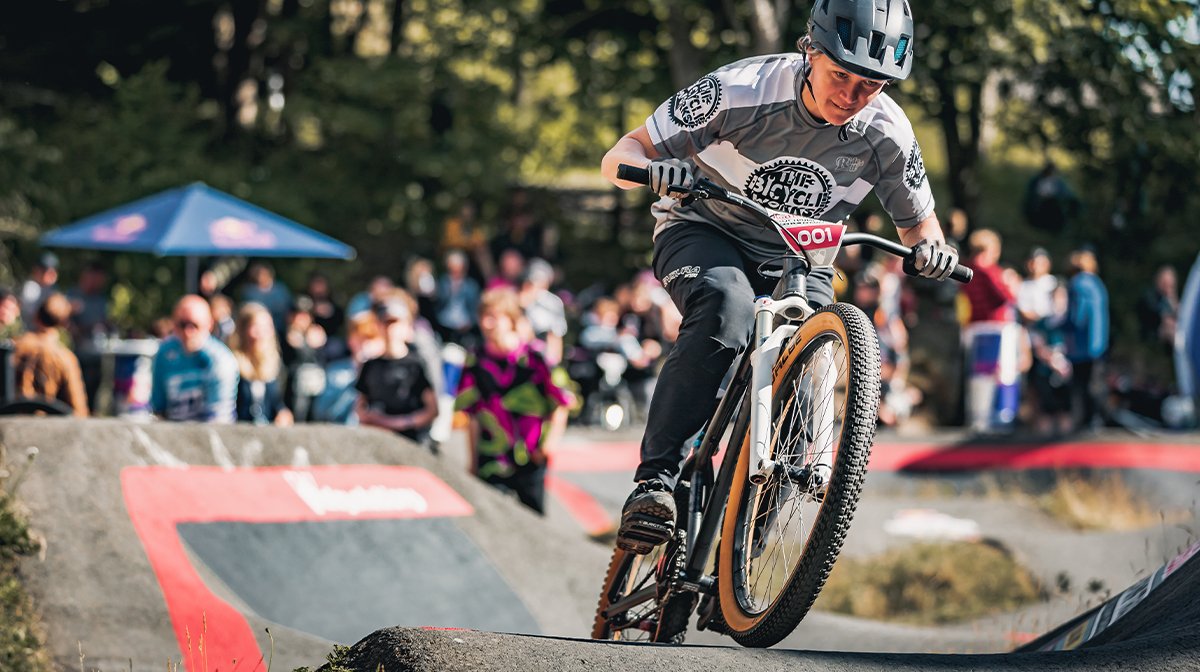 Flash forward a few years and when the first lockdown came around, Agnieszka started riding at The Skelf Bike Park in Edinburgh’s southside. Built by the community, The Skelf is nestled in an inner-city area and transformed a sliver (skelf is the Scots word for sliver or splinter) of vacant ground into a mini-bike park with a world class Velosolutions pump track and 1km of MTB trails.

When lockdown rules eased a bit, Agnieszka hooked up with Grrrlshred Edina an informal, all-wheels group that met at The Skelf for weekly pump track sessions and trips away for riding or skating elsewhere in Scotland.

“I loved the feeling of childhood that these sessions gave me, meeting up with other riders for summer evening sessions and social rides.” 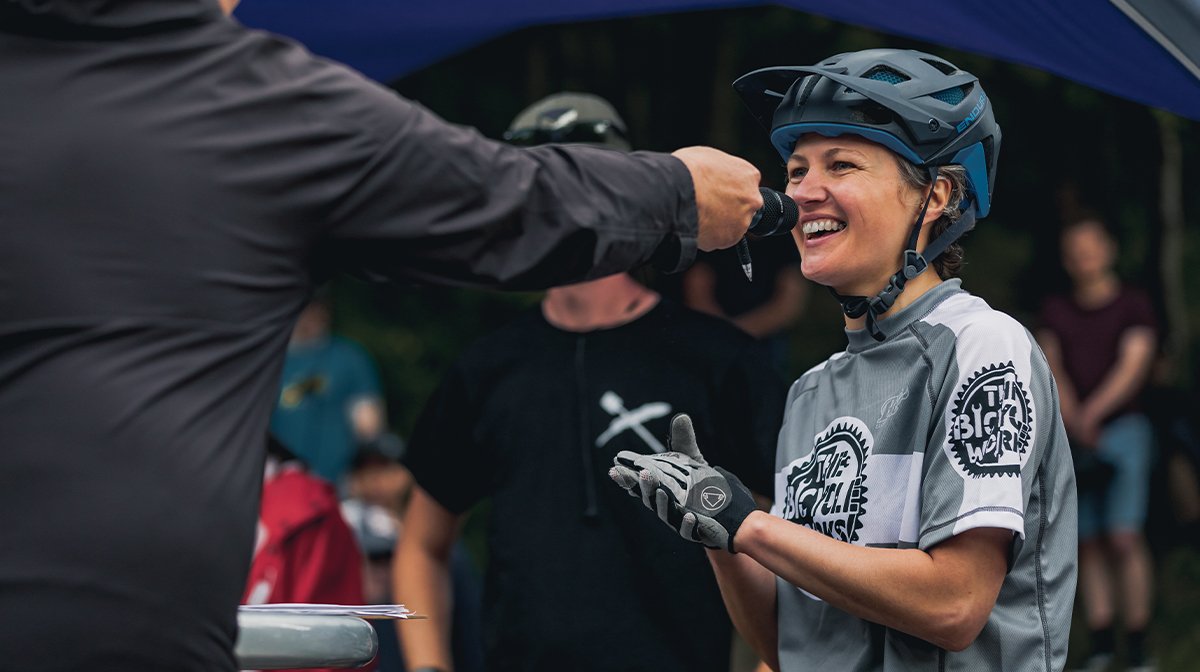 If you’ve ever had a shot of a pump track with friends, then you’ll know that once you get the track’s flow then competitive spirit will make an appearance. At the simplest level, then a phone stopwatch will make an appearance, with bragging rights the only prize available, but at the top end then there’s the Red Bull UCI Pump Track World Championships and rainbow jerseys to win.

The 2022 Red Bull UCI Pump Track World Championships will be held in the Chilean capital of Santiago de Chile on a brand new Velosolutions pump track that will be the largest in Latin America. Red Bull organise a worldwide series of qualifiers, with events running from February to late August across the globe from Argentina to Switzerland and most importantly for Agnieszka, Scotland…

Despite the main focus of Agnieszka’s riding being non-competitive, she decided to enter the Edinburgh qualifier to boost the number of women entering and have some fun on a track that she knows so well. Although after a late crisis of confidence, her friends had to convince her to take part. Javi, one of the mechanics at the Bicycle Works, Agnieszka ’s local bike shop, finally sealed the deal with a shop jersey to race in (despite her being responsible for creating hundreds of Endura Custom jerseys!). 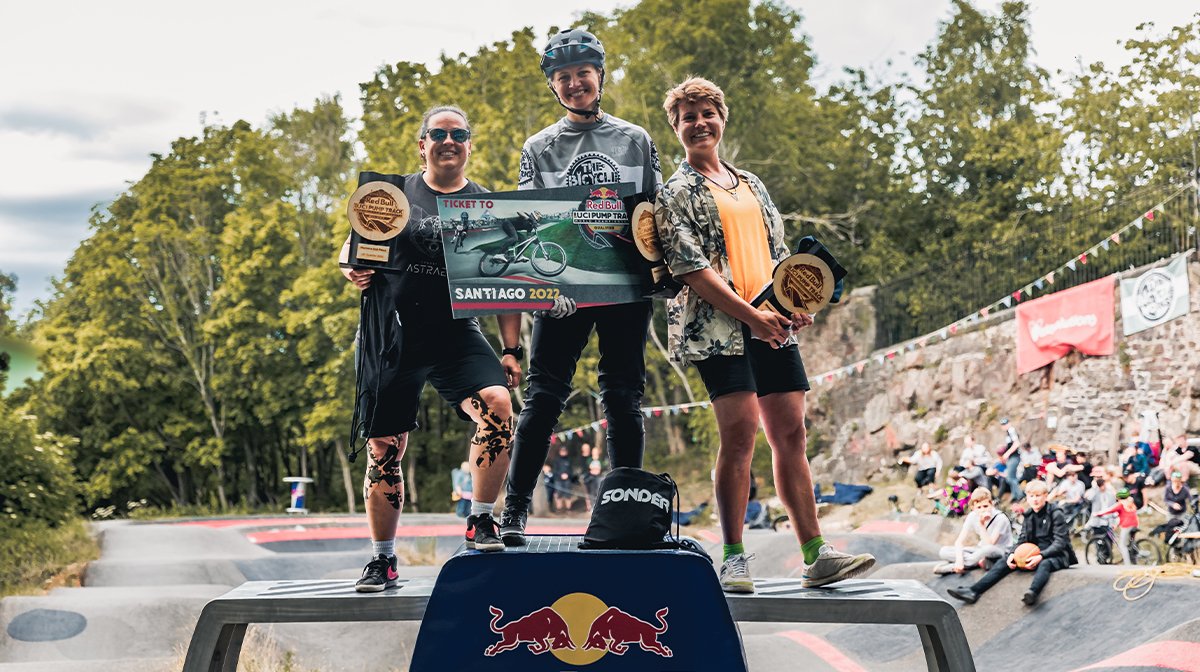 Race day arrived and Agnieszka laid down the fastest time in qualifying, earning her the number one plate for the later rounds. Held in a time trial format with a rolling start, the leading riders were paired up with the fastest rider progressing. Following some tight racing, Agnieszka headed into the final Agnieszka inst Dasha Polakova, a former elite BMXer and a UK pump track champion in 2019.

“I thought Dasha might have been holding back a little, but at least I’d end up second”.

In the final, Agnieszka laid down a couple of storming laps, besting her opponent with lap times of 21.5s and 21.6s to take the title and earn a spot for the World Finals in Chile.

We caught up with Agnieszka after the event and she’s aware that the hard work starts now – with a summer to train on strength and skills she’s already working with a personal trainer to build up race fitness and will be heading to the Tweed Valley for some skills sessions too. We’ll be following Agnieszka’s journey to Chile over the next few months and making some kit for her to wear too.

Extend The Cycle In Recycled Fabrics –…

We’ll Still Be Riding When It’s No Longer Cool

Late Summer Kit For The #HardcoreRoadie